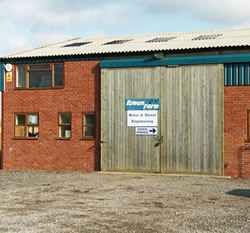 We started trading in Bourn, Cambridgeshire in 1974 moving to our current site in Ruskington, Lincolnshire in 2001 where we have a modern workshop and parts warehouse on a two acre site.

David Jackson, founder and Managing Director, has developed extensive expertise in the development of drive lines (engine and transmissions, manual and automatic) for Land Rover and other vehicles, mainly 4 x 4’s.

At M&D we take pride in the thoroughness of our engineering work and in our ability to offer our customers sound advice on correct engine and/or transmission selection for any given project.

Quality is the philosophy in all the products and services that M&D provide.

Development of drive lines (engine and transmissions, manual and automatic) for Land Rover and other vehicles, mostly 4×4.

Sales of new high speed diesel engines, our most popular ones are listed below,

Sales of new automatic transmissions including 5 speed electronic auto conversion for the Defender Tdci 2007 on with 600Nm capability.

Sales of quality repower conversion kits with or without engines to enable non- standard engines to be fitted to vehicles and non standard gearboxes to engines, mainly Land Rover vehicles.

Sales of engine parts, we are the UK distributor for MWM engines and parts and can offer genuine parts for the Land Rover 300 Tdi. The 300 Tdi engine was manufactured by MWM International in Brazil from 1997 to 2006 for Land Rover.

We offer a full range of parts for the following engines